6. The taste of Scotland 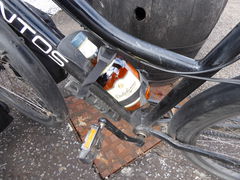 It is by riding a bicycle that you learn the contours of a country best, since you have to sweat up the hills and coast down them - Ernest Hemingway

The writer of the cycling route booklet compares the tasting of whisky with a cycling holiday. A journey of discovery, an experience by which you get to know the country better and with more depth...
By now I don’t agree with him. I’d rather go cycling.

‘You want to try it?’ Remy asks as he holds a glass of whisky in front of me. I don’t like strong liquor, but never tried whisky, so of course I’d like to taste it. I put the glass at my lips, take a sip and then....

Wham! My eyes are wide open. That hit me hard! I’m not quite sure if it is itching or tickles or both, or maybe everything within me has shriveled, or.... ‘heavy’ is pretty much an understatement. Looking back I did it the wrong way, as I read in a guide. Some day I have to do it over!
Scotland has around a hundred distilleries and half of them are in The Speyside a relatively small area southeast of Inverness.
As we travel through the Speyside, we decide to visit a distillery. Dalwhinnie is on our route, but because we had to climb most of the time, we arrived around four o’clock. Too late for a tour and tasting. We did have a look around in the visitor center and we (=Remy) bought a bottle of Dalwinnie Whisky. I’m sure I’ll get to taste it again... 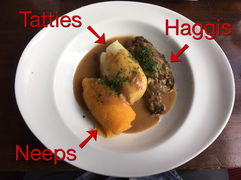 And since we’re on the subject of tasting: by now we also had a taste of Haggis. Haggis is the Scottish specialty. Vegans and vegetarians, close your eyes and read on. Haggis is a meat product made of unused organs (heart, lungs and liver) and a few other ingredients, minced and put in a sheep stomach. It’s served with ‘neeps and tatties’ which is Scottish for turnip and mashed potatoes.
Remy is the first who dares to try it. ‘Want to taste a bit?’ Remy asked while holding a fork full of Haggis in front of me. My curiosity was stronger then my revulsion and I put the fork in my mouth. My eyes are wide open. A blast from the past! “Balkenbrij” (Dutch)! Promptly I forgot my principal of eating less meat (I’m a kind of part time vegetarian) and order one Haggis for myself the next time I have the chance. My grandparents used to make “balkenbrij” from left over meat from the slaughter and I loved it. He told us - when I was still a child - it was from a bulls head. We didn’t know if we could take it seriously because he wasn’t only a farmer, but also liked to make jokes.

So much for the taste of Scotland.

And cycling? After Inverness the landscape changed a lot. Only the many climbs and descends remained and the joy of it all.

The weather is great. Since that hour of light rain a week ago (see number 5), we haven’t had any rain since. On the contrary! Apart from two clouded days, it was all sunny. Even the Scottish are impressed, because we frequently get to hear that we’re very fortunate with the weather. We camp primarily in the wild by which we make more distance per day: around the time we want to eat, we search a place to cook or eat out. After that we cycle some more around 10/20 kilometers until we see a nice place to pitch our tent. This is possible since it gets dark around 10 in the evening.
In Edinburgh we had an Hotel. There the four of us (we + bicycles) got a family-room...

We have a couple of days to go and after that the holiday is over. Now we’re cycling along the east coasts in a leisurely pace to Newcastle. Saturday we’ll take the ferry to IJmuiden and Sunday we cycle from IJmuiden to Ter Heijde over the LF1 cycle route. 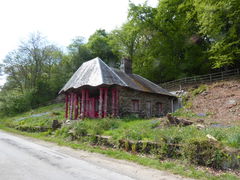 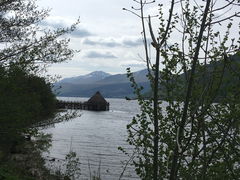 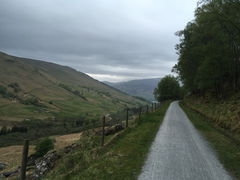 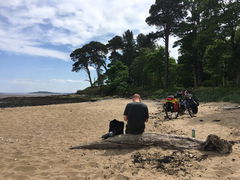 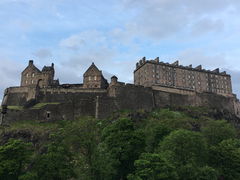 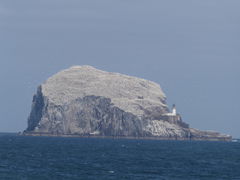