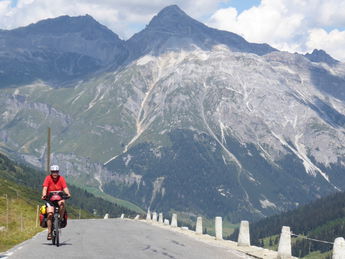 On two wheels (Op twee wielen). Just turning the pedals around and some steering here and there. That's it. Is there a more beautiful way to explore the world? You determine the distance and speed. You feel, taste, smell, see and hear nature and culture around you.

The more serious travels by bicycle I started on my own in 2007. In 2010 Mr. Right came riding in my life literally and since then we travel together. On this website you'll find stories/reports, photos and maps of our route about these travels. It's meant to inspire others and to supply information. Don't hesitate to This email address is being protected from spambots. You need JavaScript enabled to view it. me with questions.

Read the story behind the development of the Dutch bicycle guide of the St. Olav's Way here. The guide is now in print and will be available from May 8th. Pre-order? Go to the Via Gaia website.
If you like to stay informed, you can subscribe to the newsletter (🇳🇱 & 🇬🇧).

2019 On two wheel through South-Korea and Japan

According to the eighteenth century Japanese poet Kobayashi Issa everything is possible as long as you take the time for it to do it. Even a humble snail can climb mount Fuji - the highest mountain of Japan.

In 1030 King Olav went to war from Sweden to Norway along the route that is now called St. Olavsleden. On July 29 a battle with a peasant army near Stiklestad cost him his life.
If Olav knew this would be a cycling route at some point in the future, he might have chosen a route that was not so steep and rough. But maybe he was not only a warlord, but also a nature lover.

And there it was, 1171 km down the road and 409 meters up: la source de la Meuse, a small and modest spring from which the mighty river originates. 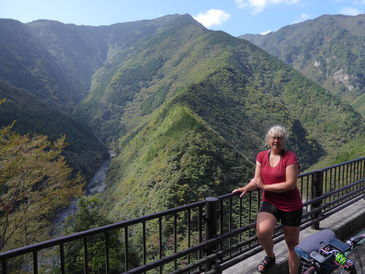 My name is Gea van Veen. I am 46 years old and live with Remy on the coast of South-Holland. On this site you will find a record of one of my great passions: cycling holidays.

I would like to thank Ania Lentz-Michaelis and Remy Bosch for translating it specially for my Danish and Japanese friends, and all the other who prefer English.

For building this website, I would like to thank Joris Lange of Smart Joomla Websites. He was my navigator along the digital roads of a html landscape.