Distance: 11 km
Weather: rain in the morning, sun in the afternoon

This is really crazy: I’m sitting in the train, next to the driver, on the way to Alvesta!
It is a small and old-fashioned train (just one carriage). The driver helped me lift the bike onto the train, warning me to hold it tight when we leave, as the train then shakes from side to side.
I could see the driver through a glass panel. When the train left, I held my bike tightly, waiting for the train to shake badly, but nothing happened. After a bit, the driver looked round and called: “You can leave go of it now, the shaking is over” Eh ...? If a train shakes badly from side to side, I think of leaving or arriving at Amersfoort station. If you come from Utrecht, or leave, you have to hold on to something if you don’t want to fall off your seat. So if a driver warns me for it, it must be bad. I thought...

“You may come and sit here if you like.” The driver grabs a folding chair and I take a seat. Wow! What a view! A pity it’s raining but that doesn’t affect my fun. What a lovely farewell to Sweden.

My best train journey ever...: 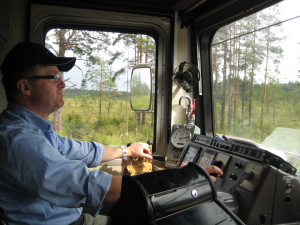 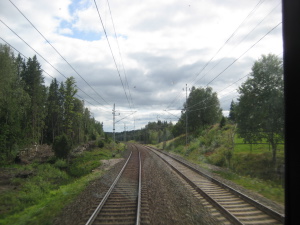 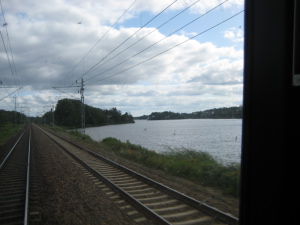 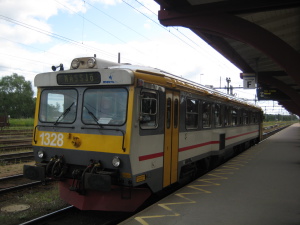 The driver is also a fervent outdoor sportsman; what I do by bike he does in a canoe

In Alvesta I change to the international train to Copenhagen. Sadly I say goodbye to Sweden. I’m sure I’ll come back!
I arrive in Copenhagen at seven o’clock in the evening and it feels like coming home. After an hour’s cycling, I find a municipal camp site, (ugly but cheap).

Distance: 64 km
Weather: cloudy in the morning, sunny in the afternoon 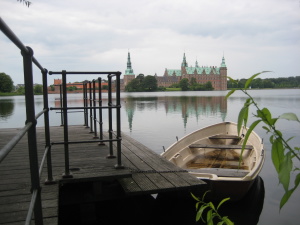 How wonderful to be in Denmark again. Unfortunately, it is rather cloudy but it stays dry and the route is beautiful. And, more important, my bike is behaving very well. I arrive in Hillerød where I had already been two years ago. In the middle of Hillerød, on a small lake, is Frederiksborg Castle. It is a beautiful castle that appeals to one’s imagination. As I have all the time in the world, I decide to cycle all round the lake and view it from all sides (and take photos).

I’m wondering what to do. There are some primitive camp sites, but in the guide I see that none of them have shelters. Since I expect rain, I don’t feel like camping primitively. As in the other Scandinavian countries, Denmark also has camp sites with a place where you can cook and eat and that’s what I want to do. At the tourist office in Helsinge, I ask where the nearest camp site is and am directed to a small site north of the town.
It really is small and I think it must have only one star, but it is fine for me and it has provision for bad weather. 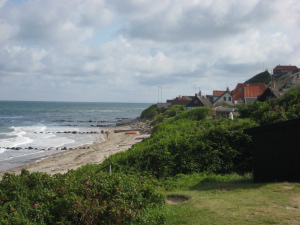 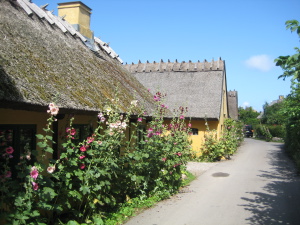 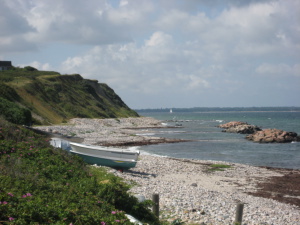 Along the coast from Liseleje to Hundested, there are only holiday villages. It is a lovely area but a bit too touristy for me.

I wonder what to do. Originally, I wanted to go to Fyn via the North coast of Sjælland. But since I have the time and my bike seems to feel very much at home in Denmark (at last it’s behaving as a bike should), I decide to make a huge detour and cycle round the Isefjord.
Instead of crossing to Rørvig at Hundested, I cycle a bit further to cross to Kulhuse.

My plan now is to go South, along an extended land tongue between the Isefjord and the Roskildefjord.

When I am opposite the island of Orø, I decide I would like to visit as many big and small Danish islands as possible. Not necessarily on this holiday, there are some 400 in all, but let’s say I’ll do a few every time I come to Denmark, which I hope to do very often!
But now I’ll call it a day. It’s already late, after seven, and I’m tired. It’s been a boiling hot day and I’ve cycled nearly ninety kilometres.
I see that there is a nature site in Vellerup and, according to the map, also an ‘ordinary’ campsite. The guide mentions that the former has room for one or two tents and that there is no water. I cycle past it and see that it is really primitive. A little sign in the grass shows the logo of “Overnatning i det fri”, otherwise it would have been invisible. No, another ordinary camp site after all. I have no more water anyway, so I cycle on.
Vellerup is a horrible village. Not a village really, but a holiday colony: lots of tidy straight rows of bungalows. There is no-one around, everybody is hiding in their own little garden, surrounded by high shrubs or fences. Occasionally I hear the sound of an engine (Lawnmower? Electric pruner?) or see water from a sprayer coming over a hedge. I can’t see any signs of a camp site, which should be on the route, along the shore. 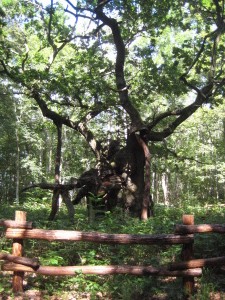 Ht is so hot, I’m almost exhausted and very thirsty. No camp to be found. I cycle through the whole village, up and down, along all the roads. What sort of ghost village is this, for goodness sake? At last I see a girl of about fourteen coming from the beach. I just hope she speaks English. And she does, a little bit. She knows of no camp site, never seen one here. She says she is staying with her grandfather and grandmother. I cycle further and hope to find the sprayer again to fill my water bottle, or even stand under it myself. And then, at last, I see something I don’t really want to see: a sign saying ‘camping’, overgrown by climbing plants, behind a closed gate with a rusty lock. So that was the camp site. Big sigh ...
Now I can do two things: either go back to the nature site or cycle further and take the ferry to Orø, where there should be a camp site. Whichever I choose: I urgently need water now. I stare at the map as if anything could be expected from it. And, what do I see? A cross. The map often shows things that aren’t there but surely a church can’t disappear? I cycle towards the cross and, sure enough, a tower shows up above the houses! And in Denmark, where there’s a church, there’s a cemetery. And where there’s a cemetery, there’s water! And, if I’m lucky, even a toilet. And so there is, all inclusive! After ten minutes, I have completely recovered. Couldn’t I secretly put my tent up here somewhere? Hm, no, I don’t think I dare. I cycle right back to the nature site and put my tent up. The ground is rough, adjacent to a field with barbed wire round it, but I’m no longer interested. I’m so exhausted that I don’t bother to wash or eat. Meanwhile, it is nine o’clock and I get straight into my sleeping-bag. I want to sleep NOW, and tomorrow is another day.

I wake up early today. While I’m taking my tent down, a lady comes by with a dog. She says good morning and goes on. A moment later, a man with a dog. Another ‘godmorgen’ (pronounced coo-mon) and the man walks on too. Apparently no-one is surprised that someone is camping here. I still find it a strange place.
I cycle to Hammer Bakke, from where the ferry goes. The lady skipper tells me how beautiful Orø is and thanks me for visiting the island. She gives me a folder and shows me all the places I must see. I’m the only passenger on board...

In spite of all her tips and advice, I don’t go right round the island. Not because it isn’t beautiful, because it is, but I haven’t got the patience, I want to go further. At Brønde I take the ferry to Holbæk

In Vig, I look for a library. I’ve promised Jørgen that I’ll try and look at my mail now and then in case there have been any reactions to his announcement.
And, sure enough, Jørgen mails that a lady from the tourist office in Assens (West-Fyn) wants to get in touch with me and whether we could make an appointment for the beginning of next week. I write back that that will be no problem. So I have nearly a whole week to get there. Lots of time. I’m curious!

I plan to take the ferry to Århus later on, then cycle down along the east coast of Jutland, where I’ve not yet been, and, via the bridge over the Lille Bælt, get to Fyn.

Odde means land-tongue. Sjælland has many of them, large and small, and if you look at the map, you see that Sjællands Odde is a long, thin ribbon, like an appendix (that worm-like attachment to your intestines, if it hasn’t been removed by an operation), hanging on Sjælland. I don’t know where my idiotic comparison comes from but it is a beautiful area, especially the first part. At one point, I miss a sign and guess I have to keep to the left. That is a steep road leading down and that sounds attractive to me.

A little later, I wander aimlessly round in the holiday village of Overby Lyng, where all the paths come to a dead end, so that I have to climb up that steep hill again. 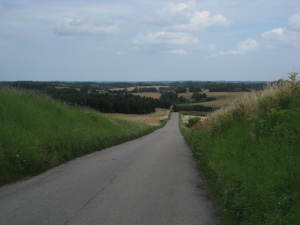 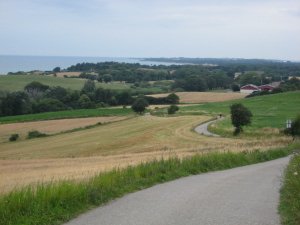 When I arrive at the harbour, I find, to my surprise, some more travellers waiting for the ferry, a lady on a motor-bike (with a tent on the carrier) and three holiday cyclists: a mother with her son and daughter. We have a chat and leave the island of Sjælland a little later, arriving in Jutland after a couple of hours. Well, next time I’ll go by pedalo, as I get very seasick and I arrive in Århus broken. Stupid ... forgot to take a pill.
The four of us cycle on together, as it turns out that we all want to go to the same camp site. They are a funny lot: the girl is about fifteen and obviously doesn’t enjoy cycling. I try and talk to her but the conversation doesn’t get off the ground. I think the boy is quite happy, but unfortunately, doesn’t speak English. The mother does so quite well, and tells me that they are doing this for the first time. I admire them: the mother is anything but slim and smokes, both of which make cycling a lot more difficult (the former as I know to my cost). They also all have an ordinary bike though that is alright, of course.
A bit later, we come to Camping Blommehaven. For several reasons, I deliberately chose a real camp site this time: tomorrow I want to visit Århus and the nearest nature site is too far away. It’s going to rain tomorrow too and it is nice to be able to make use of all sorts of provisions. I also badly need to do some laundry. It is a very nice camp site, in the middle of the woods, on the shore and just below Århus. 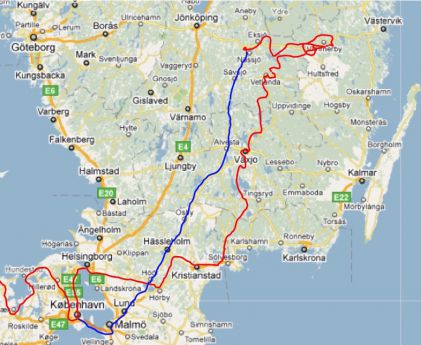