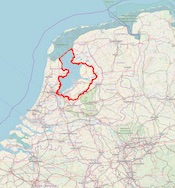 The Lake IJssel (IJsselmeer) is a closed off inland bay in the central Netherlands bordering the provinces of Flevoland, North Holland and Friesland. It measures 1,100 km2 (420 sq mi) with an average depth of 5.5 m (18 ft).

The river IJssel flows into the IJsselmeer. (The first two letters of the name are capitalized because IJ is a digraph or even a ligature in Dutch, so it is treated as a single letter).
In earlier times the IJsselmeer was called Zuiderzee.

More information over the lake can be found on Wikipedia.