Only two weeks ago, I decided to go Denmark again, like last year. With Japan in the offing, I was not really planning to go on holiday this summer, but I felt such a need to let my head be blown clear, to think of nothing for a bit, except for the route, eating and camping. Plus the same healing, revealing experience as last year.
After living out of suitcases for months, uncertainty about the move and the move itself, I knew: I’m going to Denmark again!

Just a couple of problems to solve. I lacked two not unimportant ingredients: time and money.
I could make the first. I decided to leave a few days after the move and to return just before the first orchestral rehearsal – about three weeks. I could, of course, spend them on doing odd jobs in my new house and 100 other things, but they could wait.
As for the other problem: money; most of what I have will go on the move and if there is any left, I want to use that in Japan.
But I won’t let that stop me. A cycling holiday in Denmark need not cost much. I have a book of addresses where one can stay the night for nothing or, at the most, 20 crowns (about € 3,-). That was very enjoyable last year. You have to go shopping anyway, whether on holiday or at home. Now only the journey to and from Denmark. Cycling is no option. It would take at least a week and North Germany is not very attractive – not a beautiful area and no free camp-sites (if you can find a site at all). What about the train?
Since the end of 2007, the City Night Line runs through Europe (again). It has the great advantage that you need not change trains. The 7 changes last year are still uppermost in my memories. Via the Trains Booking Office in Leiden, I buy a return ticket for one person and a bike for less than € 100,-. This office is a real find: they have connections throughout Europe and can offer very cheap tickets.

If I don’t do anything really stupid in Denmark, don’t stay in Youth Hostels, don’t have too much wrong with my bike or have my tent blown away, get ill or have to go home suddenly for some reason ..... it should work out all right.
I admit, I am sometimes a bit silly, take too many risks and think, “Well, I’ll deal with that when I come to it”. Whatever, it can’t be helped: a wheel turns when it can’t stand still... 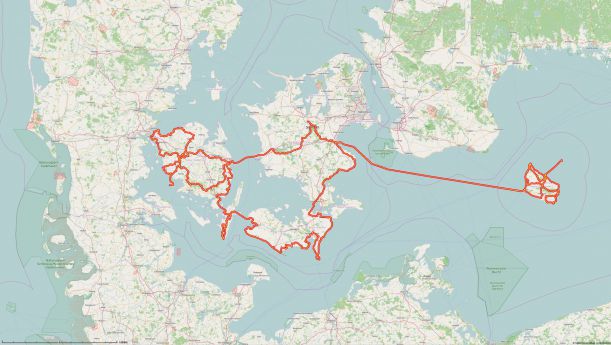