Weather: hot, sunny. In the evening and night: thunder and storm
Kilometres cycled: 89

Last night I was already in bed at 8 o’clock. Unexpectedly, I fell asleep right away and have slept for 11 hours!
At 7 o’clock, I get up cheerfully and am on the bike around half past seven. I have hardly left the site when I hear drum rolls. I recognise the sound of a brass band ready to start off. To my astonishment, I hear a brass band strike up a march.
That’s nice of them – seeing me off. 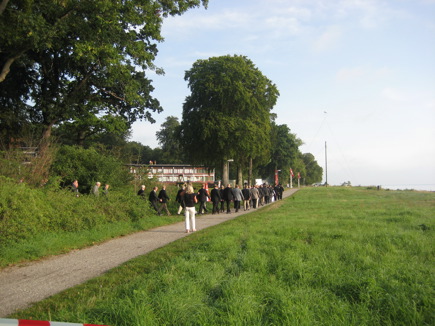 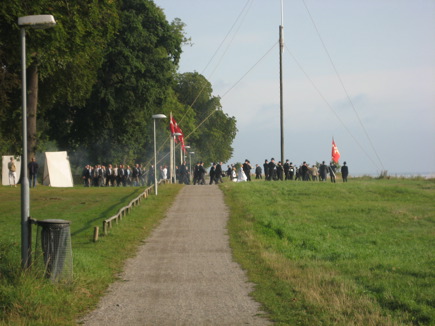 I don’t know what it is all about, but I quickly cycle to them to watch. A whole crowd of people in black marches behind the musicians until they come to a marquee. There they go round and round in circles, lots of circles. I look around to see if there is somebody I can ask what is going on, but the few onlookers are tourists from the hotel nearby. Nobody knows.
Then a few cannon shots are fired and everybody disappears into the marquee. All this at 7.30 in the morning....

I go and have breakfast on the beach. In contrast to yesterday, it is beautiful weather and my claustrophobia has vanished. Suddenly the bridge looks far less dangerous.
While I am eating my breakfast on a seat, a woman comes along. She looks at me and my bike and asks in German what I am doing.
“Cycling through Denmark”.
“With your husband?”
I look round, maybe I’ve missed something.
“Er... no, alone”.
“Alooone???”
“Hm-hm”
In order to change the subject, I ask her where she comes from and what she is doing. I thought I heard a Slav accent and suspect that she is staying at the hotel.
She says she comes from Russia and is on holiday here, in the hotel. She doesn’t think much of it here, the Danes are unfriendly, the scenery is boring and the weather is bad.
“And it is much too dangerous for a woman alone to cycle here! How old are you, anyway?”
“34”
“34? I thought you were at least ten years younger”
I wonder whether this is a compliment or an insult and decide it is the former. “Thank you, but I really am 34. Why do you think it is dangerous for a woman to travel alone in Denmark?”
“Danes are dangerous people. It is not like Germany or France here. I prefer going there; this is my first time in Denmark, but also the last. I’ve never been to Holland either. Is it safe there?”
“Oh, yes, but not as safe as Denmark”, I say truthfully. She looks at me as if she had misunderstood but says no more.
“May I come and sit next to you on the seat?”
“Of course, plenty of room”
“It really is dangerous, cycling alone! All the traffic and nature and so lonely!”
Yes, of course, life-threatening. I’m getting a bit annoyed. “Listen, last year I spent five weeks cycling here and found a lot of hospitality. I never felt safer in my life. Denmark is known as a safe country, even for women cyclists on their own.”
I wish her a pleasant holiday and get on my bike. I’m not going across the bridge but cycle south, along the beach. 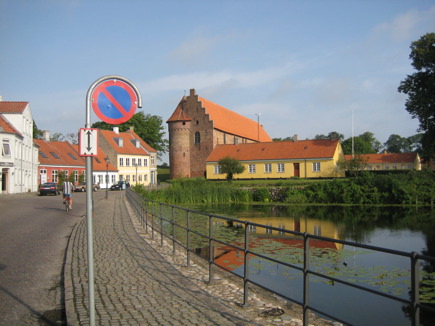 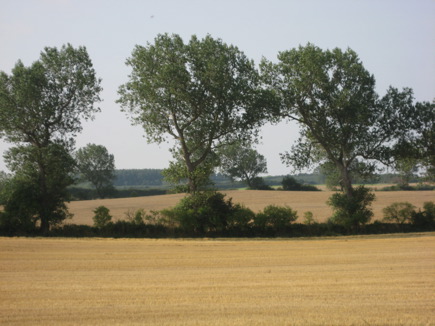 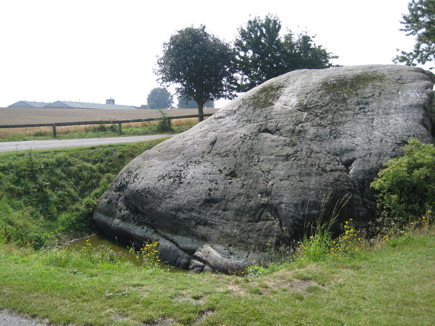 Between Vormark and Hesselager lies the “Dammestenen”, a 1000-ton rock, brought here during the last ice age. That sounds worth seeing and I make a small detour.
I walk round it, climb onto it, sit down and enjoy the view. I can see a large group of cyclists coming from afar and realise that if I want to take a photo, I must do it now. I have hardly got off the rock when the group of cyclists also stops here. They are Germans, who immediately take possession of the entire area. I just manage to take a German-less photo, but a moment later half the group is standing on it. The other half walks round it, taking photos. I get back on my bike and look for a more peaceful place for a rest. 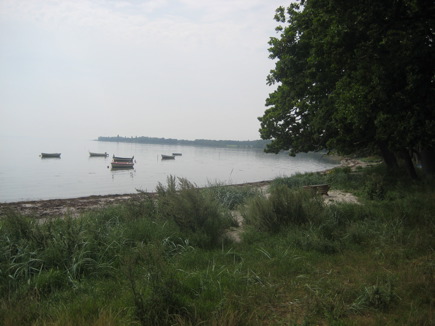 Svendborg is a harbour town in the south of Funen. Last year, I arrived here by ferry from the island of Ærø, now I enter the town from the cycle path on the other side.
I cycle through the town to the harbour and recognise it from last year. Via a high bridge across the Svendborg Sund, I come to the island of Tåsinge.

From the bridge to Tåsinge, looking south: Svendborg to the right and Vindeby to the left

A little way beyond the pretty village of Troense is Valdemar’s Castle. In the 16th century, the Danish king, Christian IV, built it for his son, Valdemar Christian.
Valdemar’s Castle is the largest castle in private hands in Denmark. It has beautiful Rococo rooms and several museums, amongst which a toy museum and the Danish Sailing Museum. 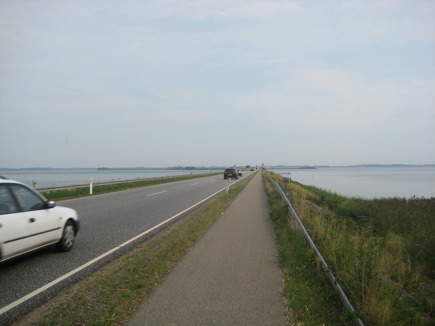 I cycle on, across the bridge to the island of Langeland, and arrive in the capital, Rudkøbing. Here I look for a camping-site, not knowing what awaits me tonight...

Near the little village of Kragholm, near Rudkøbing, I find my camping-site at a farm. The owners themselves are on holiday but their parents hold the fort, two old people who speak no English.
There are three other guests, a girl and two boys, camping together in one tent. The girl translates the information I get from the old man. I can put my tent where I like and the price is 20 Danish crowns, which I can pay when it stands.
A woman with a dog comes from the beach. She speaks a little German and I tell her that I love the spot, so near the sea, nearly on the beach.
“Shall I pay you now then?”
“Yes, 25 please”
Did I misunderstand? Oh, well, I’m not going to be difficult just for those five crowns (about 75 Euro cents). I have no change and can only give her a bill of 50. She looks worried. No, she has no change for that.
“Come along”, and I follow her. She shows me the shower and toilet.
“Do you want to use those too?”
Mm...yes, though it doesn’t look too clean, but I do need a shower and certainly a toilet.
“25 too!”
Oh...?? I’m being well and truly fleeced. So be it. I give her the 50 crowns and say, rather facetiously, that she may keep the change and she gives me a surprised look.
I leave her to her confusion and go back to the tent.

Later, I speak to the other guests again. “There’s a storm brewing tonight”, the girl says. It has been blowing fairly hard all day, but that is nearly always the case in Denmark. So if a Dane warns of a storm, there will be one.
I just manage to cook my meal but the moment I finish eating it, it starts raining. I check whether the tent and the ropes are tight enough and am in bed by nine. My first night in the new tent. A tent that weighs only1.7 kilos, with room for one + luggage in a tiny extension. I can just sit up. Ideal for taking on the bike and for camping in good weather. Rather less ideal in bad weather, but after all, nights are for being horizontal, so...

It has been raining for some time already, the wind is getting stronger and, to my horror, it has started to thunder. As a real outdoor person, I shouldn’t mind anything (as far as the weather is concerned), but thunder... I hate that and realise that last year in Denmark there wasn’t a single thunderstorm. It never occurred to me that that could happen.
I creep further into my sleeping-bag and put ear-plugs in, which is not very relaxing, because now I can’t hear any other Dangers coming. Not that I would hear them without ear-plugs: there is such a noise all round me, what with the rain on the tent, the howling of the wind and the thunder crashing. No other sound can compete and I decide to keep them in; at least they lessen the noise of the thunder.
It goes on for hours, no chance of sleeping. As a distraction, I read all the time, changing my torch batteries twice, and finish a whole book. Around 3 o’clock it finally diminishes and I fall asleep.

Private beach at the camp-site. In the distance, the bridge I cycled across this afternoon. The lull before the storm

“Survived?” the girl asks next morning. They weren’t able to keep everything dry and had to get out of the tent a few times in the night to fasten the tent securely again. In spite of, or perhaps because they have a large, strong tent and there were three of them in it.
Since my tent is rather low, it doesn’t catch so much wind. Maybe that was why I was able to stay ‘quietly’ in bed all night.

I’m on my bike at 8 o’clock. Just beyond Kragholm I see a huge battleground with lots of tents that have been blown over or ripped. Bits of tent in the trees, broken tent-poles on the road and not a single tent still standing. It must have been a youth camp or something. I realise that I was very lucky last night – my very first night in the new tent! Last year I did the northern half of Langeland, now I take the southern half.
When I am in the little town of Bagenkop, I look for a cycle shop. My bike is creaking and squeaking badly – the whole of South Langeland can hear me coming. I have forgotten to bring oil but perhaps the owner can oil my chain.
As there is no cycle shop in the town, I am directed to a smith. “He is very nice, he’ll do it for you’. It’s true, a little round man with twinkling eyes will gladly help me. He speaks no English but had already heard me coming, so I don’t need to explain anything.
His services are free. “Hollænder...”, he says and does a thumbs up. I laugh and say, “Dansker...”, with my thumbs up as well.
But in spite of the friendliness, it hasn’t helped. The bike creaks, moans and groans as never before. 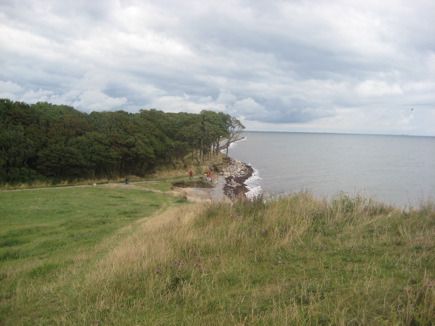 Bagenkop Harbour / Dovensklint, the cliff on the most southernmost point of Langeland

In the evening I camp in the grounds of a primary school in Sønder Longelse, with children to keep me company. They find a foreigner very interesting!
One of the boys (left on the photo) asks: doo joo spiek inglies? And runs away quickly. A little later, he comes back with the same question. I answer in Danish that I do speak English but not Danish. I shouldn’t have said that in Danish because he now starts on a rigmarole that I can’t follow. With the use of hands and feet, it becomes clear that he wants to have a photo taken with his friends. 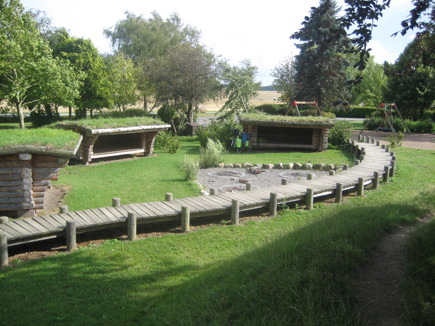