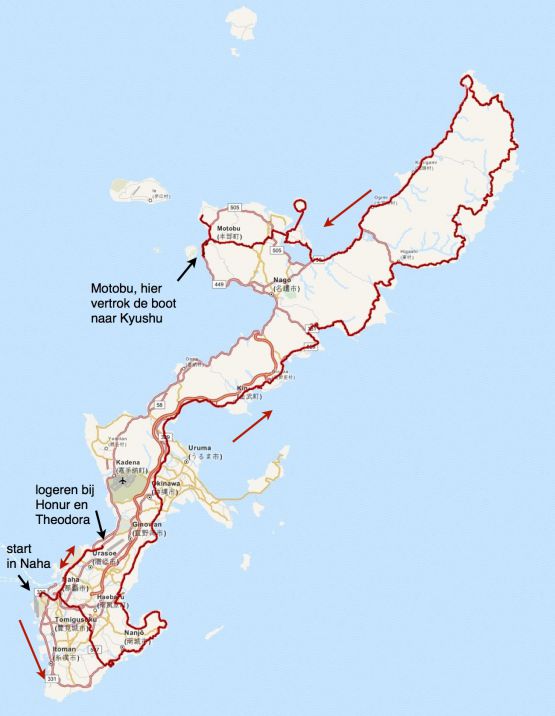 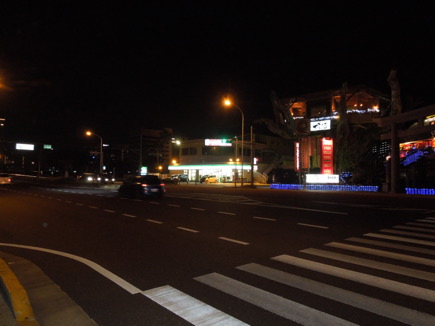 After a long journey, we arrived safely in Naha on Okinawa. We stayed with Honur and Theodora, a Hungarian couple we found on CouchSurfing. We're now getting on our bikes to cycle round Okinawa for the next few days. 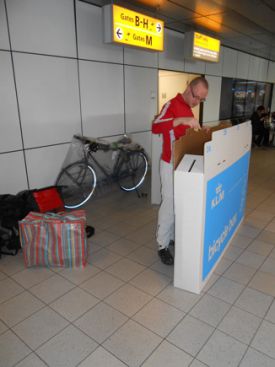 Before we left, I wasn’t even sure we would get to Japan. It wasn’t easy. First, a cancelled flight and on the replacement we ended up on different rows instead of next to each other, which would have meant a very long eleven hours. Next, we found that the “bicycle pyjamas” were not allowed on the plane and that we would need special boxes for them. Luckily we could buy them on the spot and pack them, which took some time. After that, all went well. When we told a friendly stewardess we were on our honeymoon, she arranged seats where we could sit next to each other. And in Taipei, our transit airport, we saw our bicycle boxes being loaded onto the right plane and, lo and behold, everything arrived in Naha: bikes (complete and in one piece), our luggage and ourselves.

In the end, we could go on. We’re in Japan! Our bicycles and luggage were taken to the arrival hall by us and three men personnel and there we could put our bikes back together.
At 22.30, we arrived at Honur and Theodora’s, where we were hospitably welcomed.

Since then, we have cycled all round Okinawa and are now leaving on a ferry to Kyushu, which takes 24 hours.
We have enjoyed this week! Despite a lot of rain – very welcome in the heat, but sometimes unwelcome when setting up our tent.
The southern part is all developed, but good to cycle through, in spite of the many traffic lights that hold you up. The northern part is beautiful, lovely nature and sparsely populated, but not much faster because of all the climbing and descending. But we’re in no hurry ... incidentally, we appear to be in top condition from day one. We’ve left all physical discomforts at home. No jet-lag, no saddle-sores, no muscle pain, no fatigue. We’re both a chunk of energy.
We stay at the weirdest places: a beach, a camp-site, a park, a playground, or some place we think is a camp-site ...
Talking about surprises: Remy woke me up around 5.30 the first morning in Japan, “Wake up, it’s daylight, let’s get going”. In our entire relationship, Remy has never woken me up in the morning. I’m always the first and during the holidays, I almost have to drag him out of the tent. Surprised, I was immediately awake. For practical reasons, we decided to adapt our day-night rhythm: in the morning, we get up between five-thirty and six when it is light and go to bed in the evening when it gets dark, between seven and half past. 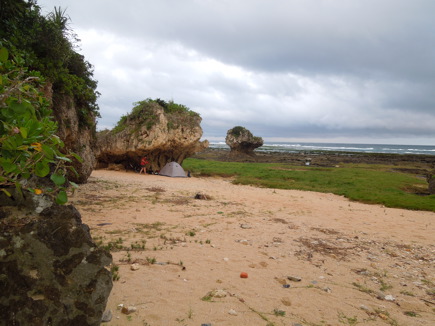 Our first unofficial camp-site in the south of Okinawa, under a rock on the seashore

On the ferry to Kyushu

One moment you have no internet for a week and the next you’re on a boat with free WIFI. I tried to send the previous mail last night, without success, but luckily it has now been sent.
Meanwhile, we have read all the (many) replies and try to answer them all personally, but I’m afraid  that won’t work either ...
We’re on the ferry for 24 hours and I thought I would have plenty of time to send a mail and catch up on my diary, but had forgotten that I might be seasick, and Remy is too, though less badly than I. The last few hours were spent horizontally but now we’re in a harbour and feel fine again, I’ll get down to it quickly. At the next harbour, Remy is going to translate it and maybe we can even send it off  today ;-) 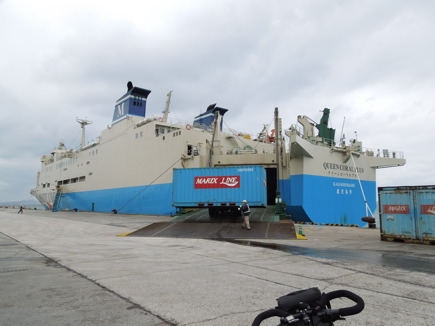 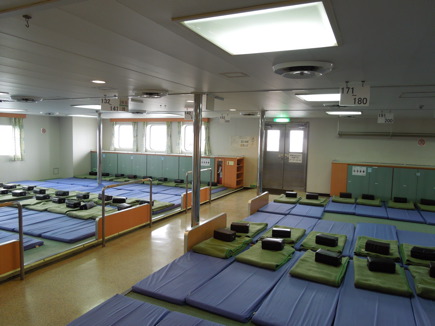 On the ferry to Kyushu / Dormitory

Click here for the rest of the photos of Okinawa 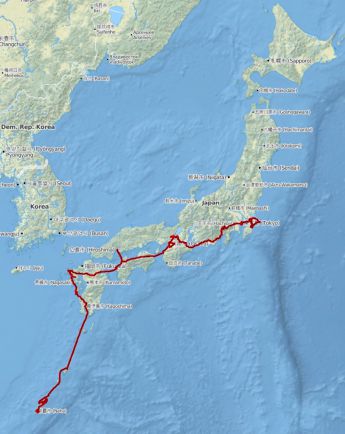