As half of Europe succumbs to the scorching heat of the sun, your knight on two wheels fights her way through the land of trolls and moose in the cold and rain and works her way through the land of high hills and mountains where it doesn't even get dark at night.
Yes, it's hard work! I already wrote that this wouldn't be a vacation? And not just during the day, at night it's no picnic either, with the lowest point around twelve sweaty hiking shoes. No småll stuff!

When I arrived in Stiklestad last Sunday, it was rainy and only twelve degrees. But as I mounted my bicycle on Monday (finally!) it got warmer and sunnier during the day. At the last minute I decided to cycle up and down to Trondheim and next back and forth to Sundsvall. If you want to make a cycling route guide, you should at least cycle the route in both directions.
I have reached Trondheim by now and hope to be back in Stiklestad tomorrow. There I'll say goodbye to my car again and start the longest stretch of the route: to Sundsvall and back again. The reason I do it in this order is the fact that I can fetch a train when time runs out. This is one of the few routes where a bicycle is allowed in the train. But for now I hope to cycle through everyting.

I enjoy this very much. Not only the breathtaking nature, but also the 'work'! I cycle small stretches back and forth, write notes or use my phone as a dicta-phone (smartphones a so handy), make a lot of pictures and videos and cycle back for it if I'll have to. Even if I have to go up a hill. And all this is being recorded by my GPS as well.
Up till now I have been camping in the wild only once and for the rest I stayed in Pilgrims hostels. I enjoy both just as much, but after a couple of hours out in a drizzle, it's nice to have your bed already made. And in these hostels you meet other pilgrims. Or you have a good evening with a nice host(-ess).

The route is wonderful. Really beautiful. Sometimes I'm cycling for hours in the middle of nowhere (sounds like 'in the middle of Norway'. Ah now I see where the expression comes from!) and next in the hilly countryside. It's no route for the faint of heart. It's really tough. In my mind harder than our trip through Scotland last year. Or mayby it's just heavier because I have to carry everything myself now and can't put all the heavy stuff in Remy's panniers? But the overwhelming beauty of the nature here let's you forget all about the hard work.
My Black Beauty behaves herself very well all-though I recently had a puncture. And where is King Olav when you need him?? Oh well, King Olav doesn't have any experience with punctures of course because they weren't invented yet in the twelveth century. Glad I didn't forget how to repair a puncture.

I have already spotted the first moose! He (or she?) was just standing there in the middle of the road. As I understood it, the moose are very shy and therefore rarely seen. So maybe it wil be thos one time.
Now let's keep an eye out for a troll!

Wednesday I arrived in the wonderful Trondheim. Maybe the prettiest town I've seen! In the Cathedral of Trondheim, the Nidarosdommen lies the body of King Olav. And thats what all the fuss is all about. Because of King Olav, Trondheim was and is an important Pilgrims destination. (If you want to read more about King Olav, take a look at the website of Pilegrimsleden).

Near the cathedral is Nidaros Pilgrimsgård, an hostel for Olav pilgrims. Staying a night there was an experience in it's own right! I slept with seven other people in one large room. Six were hikers, the seventh was a cyclist. I'm not an evening person, but as I entered the room at 10pm, I was met with a snoring choir in seven keys. I just put in my earplugs and put on my sleeping mask since it won't get dark and hoped to fall a sleep quickly. Even though I had protection for my ears against the noise and and my eyes against the light, there was one sense left unprotected: my nose. There's nothing wrong with my sense of smell and I found out quite quickly that I need protection for this as well. Because twelve shoes, used every day, the whole day for a month or so, don't smell like roses...

About the weather. I've been very fortunate, actually. Yes, there is that drizzle every now and then, but I also had a lot of sun as well. Despite the weather forecast keeps telling me about impending rain.

Still, I found it a bit over the top to see a ice cream truck. It was eleven degrees after all, cloudy and the drizzle just stopped. But then I understood the necessity of ice cream: I just arrived in Hell. Well, then you do need a refreshment. On the station wall there is a text that isn't quite what you'd expect. Have a look at the last picture....

P.s. On my Instagram account you'll see some pictures, video's and small messages being posted. Even if you don't have an account, you can see them and navigate through them. You can click away the pop-up requesting you to log on.
Click on the picture to read the accompanying message. With the arrows next to the post, you can go to the next/previous post. Some posts have multiple pictures. In that case you'll see arrows inside the picture. 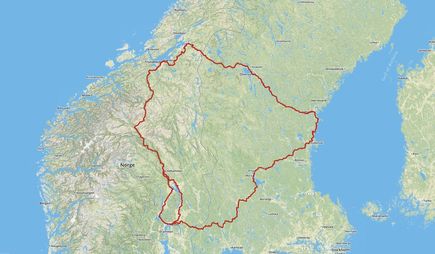