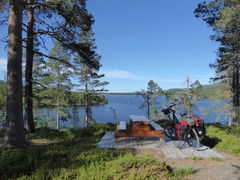 Yes! Traveling is allowed!
Friday Norway announced that the borders will open to foreigners. This was hanging in the air for a while and now I'm ready to go.

Let me be clear that if this trip was for a vacation, I wouldn't have gone. And sure there are some elements of a vacation, but it's primarily work.

As most of you know, I'm working on a route guide through Norway and Sweden, In the foothsteps of the holy Olav. Originally I planned three months of traveling through Scandinavia to work on the route, but COVID-19 put a stop to that. In that previous newsletter I mentioned that Norway was a complete write-off for this year and that Sweden might be an option to make some progress on the route.
Now the tables are turned and I'm very glad to be able to work an a large part of the route. This way one third of the job still gets done this year.

If it is wise?
As far as COVID-19 is concerned: I managed to limit a number of risks. I'll avoid the train and airplane by going to Norway by car. If the situation around COVID-19 changes - for the worse - I can travel home in relative safety in my personal cocoon. Without the car and only a bicycle getting away quickly could get very difficult since public transport could be closed off.
And in the thinly populated Norway, I have less risk of catching any virus then in the densely populated south-west of the Netherlands.
As for the other factors: I'm traveling alone and even though I've traveled alone for a long time, I still get reactions about it, which motivated me to write a separate blog about it 😉. Read here Solo.

For now I describe and cycle only the Norwegian part of the route. This route follows the St. Olav Way in Norway closely. The official pilgrims route goes from Oslo to Trondheim, but I let it go from Trondheim to Oslo. See the map on this page (click to enlarge).
For now it doesn't matter where I begin, because I'll be going back and forth. The route is divided in multiple stretches and I'll park my car at one side of the stretch to go cycling for a couple of days. Along the way I'll go camping and after a some days or a week I return to my car. After that, I continue to the start af the next stretch. This way I cycle the whole route back and forth one stretch at a time.