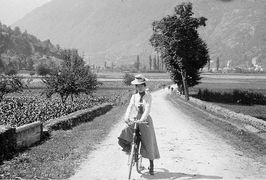 “Emancipation is: Sitting behind the steering wheel of your life." - Máxima Zorreguieta (speech 2014, Eindhoven NL)

It was 1894. At a time when numerous global adventures were taking place, Annie Kopchovsky from Boston wanted to prove that women were just as capable as men at achieving great feats. She decided to settle a wager about whether a woman could cycle around the world like Brit Thomas Stevens had about 10 years previously, and aimed to complete a circumnavigation in 15 months.

After learning to ride a bike two days earlier, and wearing a long skirt of the time, Annie waved goodbye to her young family and rode off on a 19kg women's bicycle on June 27, 1894. She carried with her only a change of clothes, a pistol and a placard advertising Londonderry Spring Water; this was part of a sponsorship deal where she also altered her name to Annie Londonderry…

It is 2020. I can imagine you read about the story of Annie and start to think: how remarkable! Leaving her husband and children behind, in that era... I also think that if it was the other way around, if the husband were to leave his wife and child, you'd just shrug and think: So, what? It wouldn't have made any impression.

Next week I'll be heading to Norway where i'll be cycling parts of a cycling route for a route guide that I'm working on. I'm going alone and will be gone for about four to six weeks. Without Remy.
You're probably thinking: How remarkable! All alone without her husband! Well, it helps when you don't have any children... And then I also think that if it was the other way around, if Remy were to leave for weeks or even months, you'd just shrug and think: so, what? It wouldn't have made any impression.

Am I wrong in this assessment? I would like to be proven wrong here. That my plans wont attract any reaction as described. That a hundred years on, it doesn't matter one bit whether you're a man or woman, both or neither. But watching the reactions I see, I gather that we made very little progress regarding emancipation. That it still does make a difference which person out in a heterosexual relation goes off traveling for longer periods of time.

Even so the comments are well meant: 'How brave, you just do it!' or 'How nice that Remy is fine with it!' (yeah, duh...); or less positive (but I won't cite them), it makes me feel like I have to prove myself to others while cycling over a glass ceiling (uhm, that last part does sound scary...).

I even considered not writing about this project while I'm on the road (since I'm working after all), but I'm not sure I can hold that stance very long. Writing is a big part of my traveling adventures So, yes I guess I do choose to cycle over a glass ceiling, just let it not be an issue that I happen to be a woman. And yes, I know cycling over a glass ceiling can be slippery.

There is a difference between Annie and me. I don't have any bets, no sponsoring, no pistol. But I do have a bag of confidence and a box of perseverance. Even a bit recalcitrance could be off use while on the road.

And how did it work out for Annie 'Londonderry' Kopschovsky? She came home after 15 months. She had cycled the world around and doing so won a bet. Her trek wasn't all roses (good thing, because they give you only flat tires), she suffered cold, heat attempted robbery and injuries. But she managed to prove that a woman is as capable as a man!