In this end of the year newsletter:

Veni vidi vici… I came, I saw, I conquered. Famous words of Julius Ceasar after a victory in 47 BC. Apart from the fact it alliterates nicely, the last word ‘vici’ sounds like the Dutch word ‘fietsie’ (spoken as ‘feet-see’) which is slang for small bicycle.
This phrase have become our words of ‘victory’. Not that the journey has been a battle, but there was plenty to conquer: ones own limits, heat, cold, rain, high mountains, deep valleys, breakdowns which on the move…

Many of you have had some battles against COVID19 in one way or another. Many have lost a lot this year. For the two of us, the losses were not that great: We were never this healthy and haven’t suffered under the measures from the government – apart from some first-world problems. On the other hand we do know a number of people who were affected by COVID19 directly and indirectly. Some are still suffering from the after-effects. A nasty fight for which there’s no end in sight for some. Let alone a victory.

Hereby we would like to voice our heart felt wish that 2021 will be a year of hope, recovery, health en above all love…

This picture was made bij our bicycle friend Willemijn Lambert. The three of us cycled over the Via Romana for a weekend last September in Germany.

In the footsteps of the Holy Olav 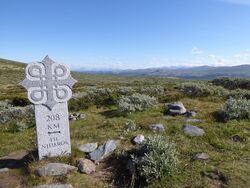 For a while it looked as if St. Olav had to wait a year, but by now the St. Olavs Way in Norway has been cycled and descibed. A lot of effort is going in to the Dutch route guide for making it ready to be published by spring 2021.
The guide “Het Olavspad - Noorwegen” together with “St. Olavspad - Zweden” and “Onderweg naar Olav” will form one large cycling route in the heart of Scandinavia with a length of 2000 km. The St. Olav’s Way on it’s own can be cycled as well.
Ice and COVID not withstanding, the whole route will be checked this summer. For this, I hope to go to Norway and Sweden for three months. And just maybe Remy and I will make the trip we had meant to go on this winter.

All information regarding the St. Olav’s Way in Norway can be found on the renewed website of Via Gaia (in English!)
Information on the sale of the Dutch guide will follow later, but you can contact me for any specific questions – like if you want to cycle this route this Summer. The English guide will follow soon after the Dutch one. 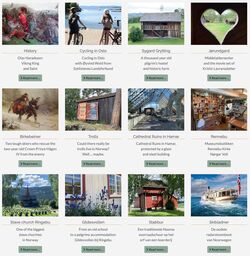 I already referred to it in the previous text: the website of Via Gaia is renewed and it is translated in English as well (big thanks to Remy!). Because the the guide ‘Het Olavspad – Noorwegen’ is finished, all the information about the route can be found there with practical information, photo’s, noteworthy items….
To bring the St. Olav’sWay to the attention of the masses, I place (almost) every Tuesday a “Tuesday Treasure” on Facebook, Instagram and Twitter. These ‘treasures’ are a selection of highlights, remarkable pilgrim accomadations and interesting knowlegde items on this bicycle route.
Not all of them are described yet, but almost every week one is added.

What’s in a name? 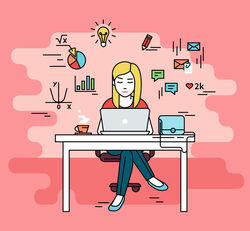 Via Gaia is almost one year old (Januari 1st) and recently discovered that my profession has a name!
Actually I have two professions: one is part-time bicycle route maker. A wonderfull profession, but it doesn’t make much money. The other part of time I’m a… hmm… what is it actually?
Before I started this year as a single person business I wreaked my brain for months on what is was called. In short I’m a digital services person, but I was told not to use this term from all sides. It was too vague. I got nowhere, also after consulting people I regarded as very knowledgeable on the subject. Even the Chamber Of Commerce had to scratch behind their ears not knowing what to call my service. Luckily I could place it under ‘other’ as in: ‘Other specialized business services’.
Finally I placed this on my site as well. Still is vague, but by specifying the services provided, I tried to clarify things.

But lo and behold! My profession has a name! And here it comes: Virtual Assistant! Abreviated: VA.
As I was directed to it, my first reaction was: what do you mean with virtual? I am a real person! There’s nothing virtual about me (even though I can be something of a ghost since I’m told that I have spirit, but other than that, I’m real).
While searching the web I found out that I am actually a Virtual Assistant. “A virtual assistant is an independent contractor who provides administrative services to clients while operating outside of the client's office. […] A virtual assistant is a self-employed worker who specializes in offering administrative services to clients from a remote location, usually a home office. […] Some virtual assistants specialize in offering graphic design, blog writing, bookkeeping, social media, and marketing services.”
Actually the term ‘digital assistant’ suits me better, but if I want to be found on the web by search engines, that is not the term that I should use.

I just hope the money isn’t virtual as well…

(Before you reach for the phone: the digital services are only provided in the Dutch language area)

"Cycling is nothing more than sitting on your bum".

A while back I wrote a blog about the fact that I’m lazy in nature, not competative at all and sports are wasted on me. Huh? You might think. But really. Just read it here...

On closing for the the people wanting to travel again, who are suffering from awaysickness: it would seem that making travel plans can actually make you happy. By now we’re somewhere between 20 and 30 travel plans! It works. Really. We now hope that at least one plan can be made reality next year….

Former president Eisenhower said: “plans are nothing, planning is everything…”, but don’t agree!

Greetings, from Remy as well,