Not contagious, but catching on nonetheless 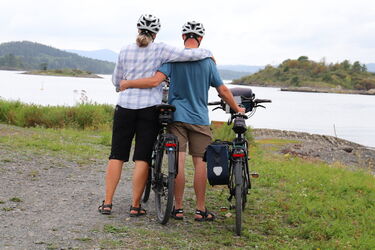 Originally we intended to be on a plane heading for the Canaries Islands to cycle there for four weeks. Everything was almost setup, plane was booked, work was delegated elsewhere, house was let-out… Instead I’m writing this blog post now on the couch with my laptop at home..

Corona. It was look bright and two months we would have gone on a trip. Now it doesn’t feel right. Think what you will: Maybe we’re overly cautious or maybe we’re made the wise decision (we’ve received both reactions already and everything in between), but the thought of sitting cooked up in a plane and helping in running down the Greek alphabet is not something I would like to contribute to.
There was tremendous doubt in wether we should go or not. We thought of more reasons to go – or not – than we have spokes in our wheels. Every time I thought of a reason not to go, or not to go in stead. The Greek alphabet was a bit of an exaggeration. Cycling around is pretty Corona-proof. But still. That rotten plane… (which has plenty of other draw-backs, but I digress). Just to think you can end up in a hospital over there, to name an example.
One of the reasons to go anyway is cycling itself. Just like many other outdoor sports, cycling is very suitable to practice in a Corona-proof way. The only virus we could spread is the cycling virus. Not contagious, but can still might catch on nonetheless. We hope…

So plenty of doubt. Until Remy stated: We’ll postpone it!
This gave us a peace of mind.

So… a new plan! The first two weeks leave of 2022 are returned and we’ll start working as usual (all fun, but I would have loved to be on holiday on my birthday!). The coming weeks we’ll be cycling a lot. The first week in Limburg in Belgium. We’re still making plans for the second week.