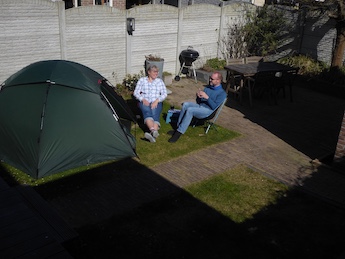 "Camping out?? But the toilet buildings are closed on all campsites!"
"Yes, we have our private toilet"
"??"
"We going to camp out in our garden..."
I thought our neighbours wouldn't be surprised by our undertakings by now, but I had that wrong.
Ik don't think we're boring neighbours...

Like most of you we dreamt of a wonderful spring in which we could go out and make plans for the holidays or live them, but the Corona Pandemic put a stop to that and keeps us at home.
From a number of you I gather that the current situation has some very bad side effects. Concerning health, income and even on future prospects. All the more Remy and I realise how fortunate we really are in these times. We healthy and can both work at home without any issues. Every morning we cycle over mostly deserted bicycle paths for an hour to maintain our health and refreshed we start working around eight. The only (first world) problem we, but mostly I have is way-sickness. Mind you that this is a chronic condition I have, so at the most it is worse now.

On januari 1st I started my own business called Via Gaia. A business that occupies itself with two different areas. On one side giving in to my overwhelming desire to travel: developing wonderful bicycles routes. The first route In the footsteps of the holy Olav is being worked on intensely. The other side of my business navigates digital paths though the html landscape by providing digital support services. And I stopped working for the Netherlands Carillon Centre.
One could say that the timing for quitting ones job and starting a business couldn't be worse, but at te moment I'm just fine working on the bicycle route guide and providing digital services. but... if the (Dutch) route guide makes it to the planned release date (spring 2021) depends on wether I can go cycling in Sweden and Norway...
Note that I also plan an English version of this route guide (and the Via Gaia website).

In the footsteps of the Holy Olav

Our holiday plans have changed a number of times already since we're back from South Korea and Japan, but the plans are at the moment of writing: Remy and I leave for South Norway for a holiday of three weeks. After that Remy goes home from Oslo and I start life as a digital nomad with cycling and describing In the footsteps of Holy Olav.
I keep in mind that these plans might thwarted. The first setback has already popped up: the ferry from Frederikshavn (DK) to Oslo (SE) is taken out of service permanently. This was the only connection with which you could take along your bicycle and start right on the route. The alternative is now: with the ferry from Hirthals (DK) to Larvik (N) and 130 kilometers cycling or by train with the bicycle to Oslo. The "damage" is limited, but inconvenient because it takes another one or two day cycling just to get to the route.
Meanwhile I move on with the preparations. What is done, is done. Worst case, is postponing for a year. But there are worse thing in the world now...

Dear people, take good care of yourself and each other. We wish you all strength and good health!
Remy & Gea

For everyone who wants to travel:

From here to here

Where it's quiet
sit down peacefully

Close your eyes
take an atlas
between the ears

Until you arrive
where it is quiet

There where you
sat down peacefully
to see something
of the world. 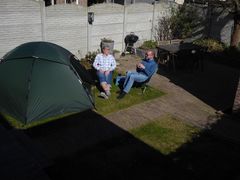 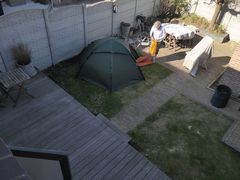 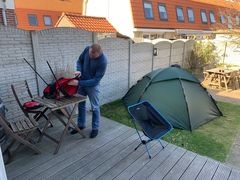