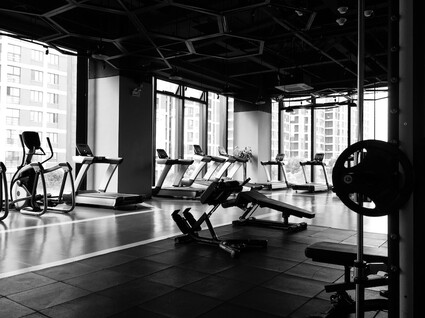 This week I went to a gym for the first time in my life. I want to give my stamina a boost and loose some weight. And this time, before I go on a long trip in staid of during the trip. Because I'm swimming in the sea since September last year, I'm cycling less, but because of the swimming I got very hungry. In short, I exercised too little and ate too much and I'm seeing and feeling the consequences.

So, the gym. Something I was always against. I was also very proud that I never set foot in one. Because why would you do a sport in a gym which can be done just as easily outside? Why would one listen to that awful music voluntarily? Why would you use those devices when you can walk, cycle, vacuum, clean the windows, weed the garden, etc....? Every workout is within reach within one's own house, garden, shed and many kilometres around you. You house remains clean and it keeps the garden neat and tidy.

So much for that theory.

And the my friend asks why I don't seem to be able to keep in shape and still am gaining weight again. I had no good answer to that and came up with a number of excuses' "Remy does vacuum much better than I do!", "playing the clarinet is more fun than housekeeping", "Once the weather improves I'll get back in shape again"...

Monday evening march 28th: in-take interview and session of an hour on fitness devices. Apart from the muscles used while playing the clarinet, I wasn't aware the I had any others in my upper body. Until now.

Wednesday evening march 30th: An hour 'spinning'. Cycling hard while changing from sitting to standing on a regular basis. I knew from the start that I wouldn't be able to endure it for an hour. It wasn't the cycling, but that MUSIC!!! Well, 'music'... I thought that the audio installation was broken and could only produce strange and loud noises from the speakers! And then the instructor shouting over that noise that the knob needs to be turned to the right. I thought, 'You're in charge of the volume knob, aren't you?'. But he meant the knob to increase the resistance. To my surprise I held it out for the whole hour. While longing for the Norwegian mountains, Scottish Highlands and the quiet noise of flowing streams in Sweden. The next day I listened to the harpsichord concertos of Bach. Next time I would like to propose that for the background beat.

Saturday morning April 2nd: 45 minutes of 'HIT-cycling' (By the way, my vocabulary increased as well this week). In the HIT-cycling lessons the intensity is determined by your individual heart rate zones. On entering the instructor said "I know you, You wrote the Olav's Way route guide!" Huh?? Is happens to be a vacation cyclist as well, went to on of my presentations and is planning to ride the Olavs way. I was already enjoying the lesson before it even started!

After an hour I was well aware that getting back in shape for cycling would take some time. The music was pretty bearable. I could even hear and understand what was being sung "Don't stop thinking about tomorrow", “Look at me, I'm a train on a track, I'm a train, I'm a train, I'm a chucka train, yeah”. Very good cycling rhythm!

Next week is the first appointment with a nutritionist who has the following slogan on his website: “To Eat is a necessity, but to eat intelligently is an Art”. I think it means making artwork out of food, like a cloud out of whipped cream, the tower of Babel with the same hight, or a pool out of smarties. At least I think. Maybe I'm wrong. We'll see next week.