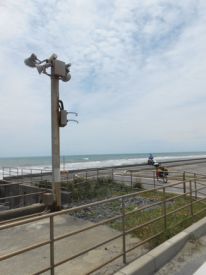 It is 20:49 on Wednesday, May 15th. We found a place to camp on a playground in the middle of a residential area. Remy has already been asleep for some time and I am trying to write another Japanicety, although I can hardly keep my eyes open. Suddenly the voice of a woman blares from the loudspeakers, so loudly that even Remy wakes up (normally you can fire a cannon next to him before that happens). I crawl out of the tent. What can be so important that even little children and unsuspecting foreigners have to be woken up? But some teenagers keep on talking and laughing as though nothing has happened. I don’t see panicky people running into the street, so I just crawl back into the tent.
Japan is a very noisy country. There are loudspeakers everywhere, not only in urban areas but in the surrounding countryside. At 7.00, 12.00 and 17.00 hrs., a tune is played, ranging from “London’s burning” to “Alle Menschen werden Brüder” from Beethoven’s 9th symphony. High in the mountains, you can be startled by “Auld Lang Syne” or “Für Elise”. The latter can often be heard from a garbage van.
Music can also be heard on squares, in shopping malls, restaurants and museums, often Japanese pop-music.
Not only outdoors, but everywhere indoors, there is a cacophony of sound. Luckily, in restaurants and museums there is only one at a time, but in supermarkets and department stores there’s a different radio programme in each corner. Electronics shops are worst of all. Each sort of sound medium, television, electric piano and so on is on full blast. Maddening.
Enough to make you crazy.

Just listen (advisory: turn down the volume a bit...):

Background music in a electronics store