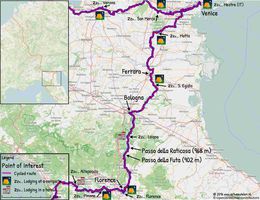 The difference couldn't be larger: Po Valley versus Apennines. The Po Valley feels very much like the flat polder of the Netherlands. Cycling over dike roads, looking at the horizon far away, agriculture, meadows and even a strong head wind! Not only that, but we has more clouds and in the evening even rain.
So far the Po Valley...

Yesterday I told Remy how I noticed the lack of nature. Since we were in Italy we had to do without nature. The landscapes we went through were beautiful, but very cultivated. No nature that looked untouched. No wild animals - apart from some lizards - and almost no birds.
But I was just done talking and there were the Apennines rising in front of us! We just left Bologna, it was around three o' clock and only 30 km to the next camping. Although we were warned, after a week without climbing, an ascent of 700m looked very improbable....
The first kilometers we hardly climbed. 'Not so bad, is it?' I told Remy. But the easy part was short lived and soon the roads got steeper. Still I was enjoying it (at first...). Climbing also means something different, like beautiful vistas and untouched nature which the Apennines could provide! Even the forests that I missed so dearly.

After almost one hundred kilometer we arrived at the camping which was actually a B&B with a small camping for two tents. I was dead tired.
To our dismay we found a note on the gate: closed from 5 to 7 September. We checked the date and had to conclude that the gate won't open for us today. Now what? The next camping is 30 kilometers away including two passes we had to go over. Remy could continue (he said), but for me it was not an option. And for the first time in my cycling vacation career we went to an hotel!

By now we had a day of two passes and a lot of ascents and descents behind us. And so we entered Tuscany almost without realising it. Going down all the way we cycled through the hilly landscape that was typical of Tuscany with olive trees, vineyards and long lanes with cypresses. There's no city we entered in so wonderful way: Florence!
We will stay for two nights on this camping to visit Florence tomorrow. 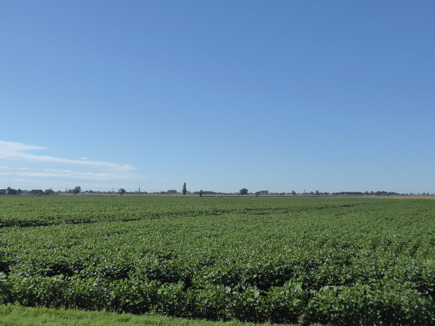 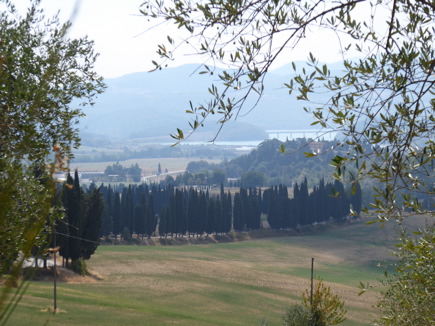 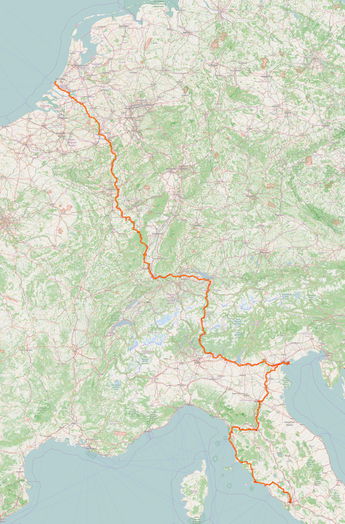