1. On our way to South-Korea and Japan! 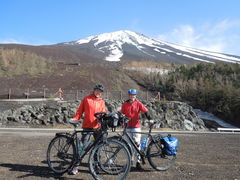 According to the eighteenth century Japanese poet Kobayashi Issa everything is possible as long as you take the time for it to do it. Even a humble snail can climb mount Fuji - the highest mountain of Japan.

Some people might remember this Haiku (a Japanese form of poetry) from one of our newsletters in 2013 - albeit a bit molested.
In that year we traveled to Japan after we said “yes” to each other in secret. Soon we’ll be going to Japan again and no, there will be no surprises this time. No emigration, no divorce and no child coming either, to name just a few.
We do go this time for the period of eight weeks. Not only for Japan, but also to go to South-Korea.

South-Korea seems to be a real cycling country. There is even the longest bicycle path in the world: The four rivers trail. This route goes from Seoul in the north-west along the four rivers to Busan in the south-east and is constructed by a south-Korean water company K-water. The government started the four rivers project to secure the surrounding areas against flooding and secure freshwater reserves in times of drought.
The total length of this bicycle path is 630 kilometers.
Because we want to see more of South Korea then just the four rivers, we will only ride part of the route. We also want to cycle a part of the east-coast, visit Min Jin (an acquaintance through my work) and maybe a visit to the island Jeju south off the southern coast of South-Korea.
After three to four weeks we’ll take the ferry from Busan to Fukuoka on the Island Kyushu in Japan. We’ll travel in the southern part of Japan and pass the last week of our time in Japan with friends in the area around Osaka and Nara to fly back home from Osaka.
On the map you can see the route we’ve planned.

Last time we went to Japan, we had no route planned. Only a list of what we wanted to see and the knowledge the we had to be in Tokyo on a given date for the flight home. We decided our route on the spot with some help of our GPS to check that it wouldn’t be a dead end.
Having no plan gave us a feeling of freedom and peace of mind, but. We also head a lot of: “but haven’t you seen this or that?” end “you were so close!”. In some cases is was pity having missed something.
Remy would love to go free or improvise, but I wanted to plan everything as much as possible with all the highlights I can find. We made a compromise which had following result: the past year I wondered through the Lonely Planets of South-Korea and Japan, spent hours roaming through Google Streetview and traveled over the digital trails on judise.nl, an online GPS track editor on which you can make your own routes. And you can see the result here. Remy didn’t concern himself with it and let it surprise him.
Everyone is happy.
By the way, Remy learned a bit about the Japanese language and writing for this trip. I was supposed to get acquainted with South-Korean, but, well... I was busy with other important stuff (Remy says I still have a week).
So this way we both have our own sort of pleasurable anticipation. According to the present-day philosopher Alain de Botton the pleasure of anticipation is better than the trip itself, because the attention is directed to the perfect elements. This anticipation is not based on the trip itself, but on the ideal versions of the trip. You anticipate the wonderful view off the mountaintop, or the sparkling waterfall or other wonders of nature; not the disappointments of rain and headwind. “The light of anticipation shines on the rose and not on its thorns”. If I were to follow this train of thought, I’d say it’s better to cancel the trip the day before leaving: mission accomplished without the disappointments! But I’m no philosopher. At best a velosopher who is digressing. Anyway, we’ll leave on Sunday on the 1st of September on a plane to Seoul and hope to land healthy and in one peace on Saterday on the 26th of October back on Schiphol.

Frank Renssen wrote a poem for which Remy attempted to translate here:

Where sincere loyalty was worked
Then in between two wheels,
With a common goal
Toward brave compassion between two souls
Known as pedal-knights
Braving into the rain and wind,
Over winding and windy tracks
Edging along a cliff.
It’s in their blood
For years and forever,
Grinding knees,
Knobby fists,
brave thighs
Over gravel and boulders.
Bonnies frontier
With mountains in view.
Crossing straight over
Toward rough and rugged lands
The zen of seeing
Also in Nippon maybe?

With sincere apologies to the poet and the reader [Remy]

P.s. On my Instagram account you'll see some pictures, video's and small messages being posted. Even if you don't have an account, you can see them and navigate through them. You can click away the pop-up requesting you to log on.
Click on the picture to read the accompanying message. With the arrows next to the post, you can go to the next/previous post. Some posts have multiple pictures. In that case you'll see arrows inside the picture.