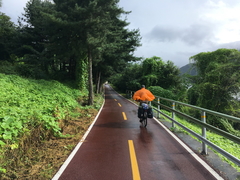 ''The period to travel to South Korea is September and October. It is pleasantly warm, sunny and dry. The mosquitos are gone, you have the best chance of a blue sky and its wonderful nature is still in bloom”, as written in many travel guides and sites.
A reality check: Hefty rain, Thunderstorms, tropic heat, extreme high humidity and an army of mosquitoes that are relentless, as is clear by the number of small red bumps on our bodies. And as if that wasn’t enough: Thursday we got four independent messages telling us one thing: make sure you get somewhere safe. There’s a typhoon coming to South Korea!

I think Instagram is an interesting phenomena. At first I didn’t think much of social media, until my cousin Erwin talked me in to ‘going on Instagram’. By now I follow a lot of traveling cyclist and they follow me. It feels like a ‘cycling community’ that facilitates in almost anything. You get asked questions, or ask them yourself, you get tips and you give them, you encourage or are encouraged. And the idea that there are thousands(!) of other nutties like us are cycling the globe, gives me a sense of community feeling.
And through that medium we were warned about typhoon Lingling.

We saw from the prospects of the storm things weren’t looking very good, even though we were cycling away from the projected path of the storm; we would start to feel the effect of the storm on Saturday. And not only Lingling, on Friday too we would have rain and thunder all day long.
We’re not quickly swayed by weather forecasts. We both regard it as ‘we’ll see it when we get there’. Seeing is believing.

To our surprise Friday was very hot, yet dry for the most part. We did get very wet, but that was from the sweat and humid air and because we had to climb a lot. To our relief, our location was no more in the “margin of error” for the projected path of Lingling and we would be out of danger.
Yesterday (Saturday) was pretty much the same with a light drizzle every now and then. But at the end of the day the wind started to pick up.
That was Linling giving us a final push to the east.
We sought and found a wonderful place to pith our tent and hoped the wind would start to lie down. I have to admit that I hardly got any sleep. I was keeping a weary eye on the howling, gusty and ‘pushing our tent around’ wind, while Remy slept through the whole ordeal. It wasn’t till half past five in the morning that the wind finally died down. 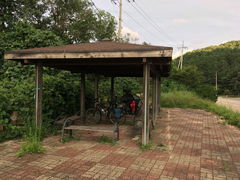 And now we’re in the fisherman’s town Geoji at the northern east coast of South Korea. Despite the weather we had some wonderful days of cycling. It was interesting how we cycled out of Seoul over a wonderful bicycle path along the Han River.
It looks like South Korea is an ideal cycling country. There are a lot of separate cycling lanes and cycling facilities. I wrote ‘It looks like’ because there’s something strange going on. We hardly see any cyclists. It could be the weather. Not everyone uses a bicycle for fun in the poring rain and/or damp heat...
The first two days we cycled along the Hangang (Han river) over the Hangang Bicycle Path and next we had to climb. Into the mountains.
An impression: 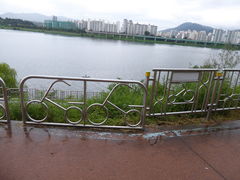 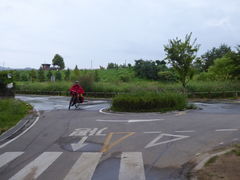 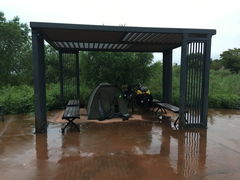 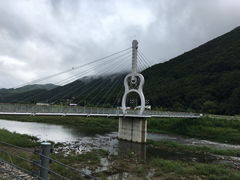 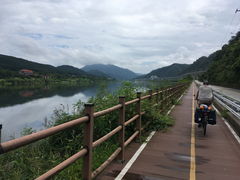 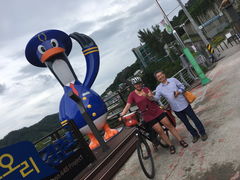 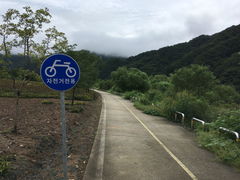 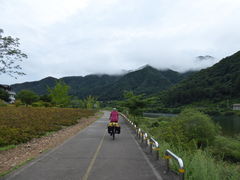 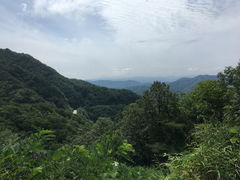 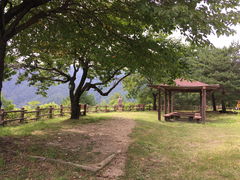 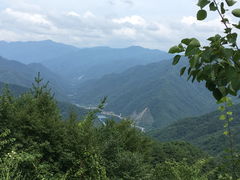 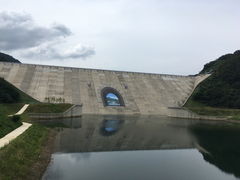 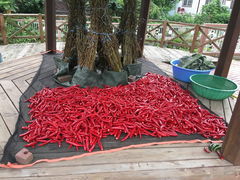 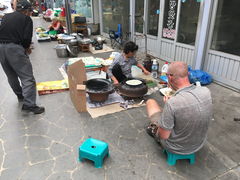 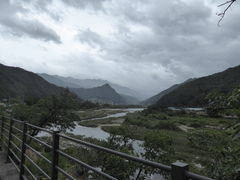 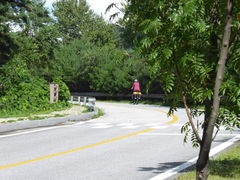 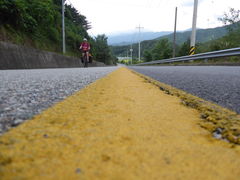 Here, in Geonji, we want to stay for a couple of nights to visit the DMZ (demilitarized zone).
We’ll go by taxi because cycling to the DMZ is not allowed.
The Korean demilitarized zone is a buffer zone between North and South Korea. It is akin to the Iron Curtain during the Cold War in Europe: A heavily guarded border with on both sides an army to ready to defend themselves against the enemy. The border is 248 kilometers long. The DMZ is 4 kilometers wide. The zone is covered with land mines.
We were early in Geonji and wanted to book two nights in a hotel.To our surprise we could already enter our room. We brought up our panniers and started cycling in the direction of the DMZ. You see, there’s a sign posted cycling route there!
It were 20 very remarkable kilometers, with along the coast high fences with barb wire and concrete anti tank constructions. When threatened the small spring loaded blocks are blown up and the blocks topple over to block the road.
The last village is Geojin and just after that village we stumbled upon a large, closed fence. End of the cycling route. A couple of friendly militarily men made with some hand gestures and a few words of English clear that we cannot go any further. We cycled the 20 kilometers back to our hotel.
Tomorrow we have a day “off” and visit the DMZ with a taxi.

On our way to DMZ: 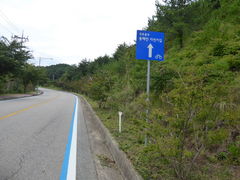 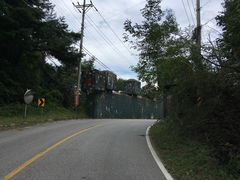 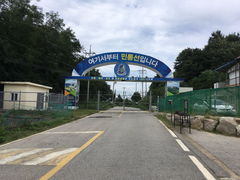 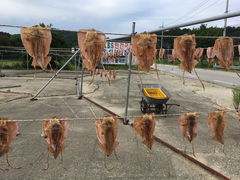 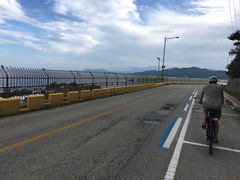 Until next time,
Annyeonghi!
Remy & Gea