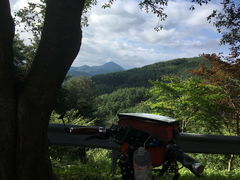 By now, we’re cycling over the Four Rivers Traill. This trail goes from Seoul to Busan along the four rivers.
We cycled the first day a small part of it from Seoul, but quickly went off of it to continue cycling to the east coast.
It sounds fantastic: the worlds longest cycling path at 630 kilometers with plenty of Picknick spots, toilets and a fine cycling path.
But....

We have been hearing that it is quite dull, from a lot of cyclists that have done the trip. It is a neatly laid cycling path straight through a cultivated landscape. A lot of flegel dull stretches.
The advise given from all sides: deviate. Then you get to see the rural South Korea and it is much more interesting. Then there’s always this question: should we follow the advice or undergo the experience ourselves and discover that it is actually quite beautiful and worthwhile. Or that they were right.
For the greater part we followed the advice, but our last couple of hundred kilometers in South Korea will be over this bicycle path on which we just started. Thus far we like it enough, but we only had a small part of it. We’re presently are cycling along the Nakdonggang (gang = river).

That rural South Korea is something we experienced from the moment we went land-inwards. Along the coast it was quite touristic, but once inland there was little left of it.
While we were an attraction ourselves for the Koreans along the coast, in rural areas we were a complete sideshow. Frequently we got stared at in amazement and the ‘oh’s and ‘ah’s were heard on a regular basis. There was waving and car horns and even drove alongside us to make pictures of us cycling or to encourage us. We received fruit, energy bars, bottles of water or cans with something to drink.
Another difference with the east coast: there were barely any amenities. Where we tripped over the convenience stores, coffee bars and toilets, we now have to hoard supplies and do without our regular cups of coffee.
Still we found more of those wonderful wild camping spots an the high mountains weren’t as high as in the north.

We cycled through the Ice Valley: a valley where due to its geological nature can form ice in the summertime. In a cave we got some ice cold water in our bottles. 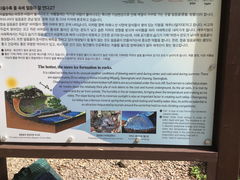 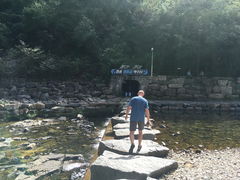 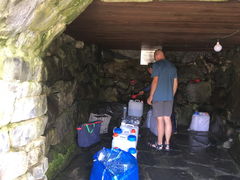 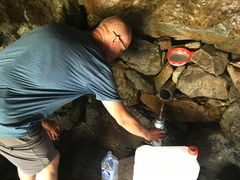 And we cycled through a farming area where the main produce were apples. They are very expensive elsewhere in South Korea and are affordable here (and huge).
We visited the Hahau Folk village. A sort of open-air museum that’s partly inhabited. 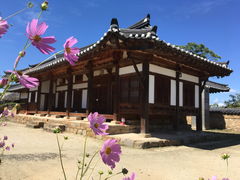 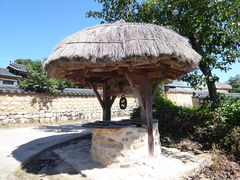 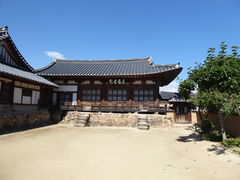 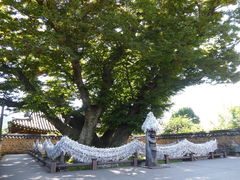 The parts above was written yesterday evening. By no we have indeed a very dull day behind us. This morning it started promising with some (very steep) climbs and some wonderful views. After that it got flat and dull. Whole stretches without any shade (it’s over 30ºC) and nothing other than a cycling path and a river.
From boredom I started to sing and little later we did a duet of My Bonnie is over the ocean...

This will be our last week in South Korea. Thursday we hop on the train to Daejeon, to visit Min Jin. We park our bicycles and luggage somewhere. How we’ll do that is another story for another time.

Until next time!
Annyeonghi!
Remy & Gea 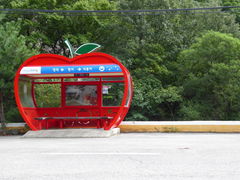 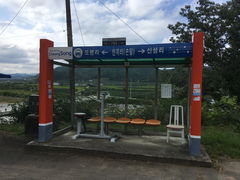 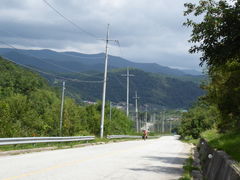 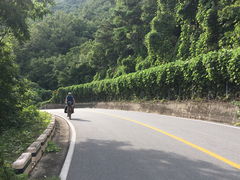 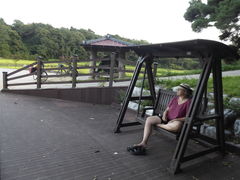 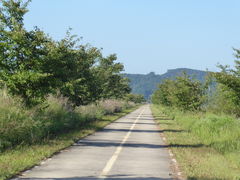 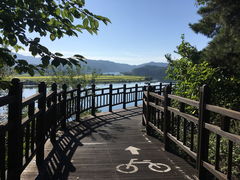 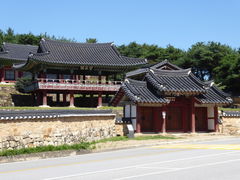