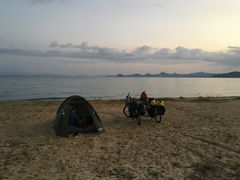 If you camp in the wild and are woken up by sounds of movement around the tent, then it will most likely be an animal. In Japan this is in order of probability: mice, rats, snakes, deer, raccoons, monkeys and bears. If on the other hand the time is between 4:00 and 6:00 o’clock, the chances are that a local Japanese is doing some exercises. It won’t make a difference that there happens to be a tent. There’s some stretching, bending, hopping, waving.... alone or in a group, with or without a radio for some music to hop on.
When you’re still sleeping around 6:00 o’clock, then you can be woken up by an equivalence of a church bell or “public alarm clock” in the form of speakers that emit music like Edelweiss or London’s burning.
Morning!
Or as said here: Ohayo gozai masu!

So we’re awake early in the day and rise up around six, because it gets light outside. We do keep a peculiar routine: before seven we’re on the road and continue cycling until around five to half past five. In any way you want to have the place before six o’clock to pitch our tent because it gets dark soon.
Once it is dark, you won’t be doing much anymore so it might happen that we start sleeping around seven. To be honest, I don’t get much writing done this way.

The fact that it’s dark so early is a disadvantage to us while cycling in Japan during autumn.
Ah yes, the Japanese autumn... it’s still strange to have temperatures between 25 and 30 while we’re cycling through dry autumn leaves and taking a plunge every now and then in the sea for some cooling. 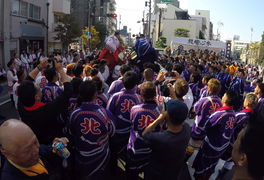 Monday we cycled through Matsuyama, a large city on the west coast of Shikoku (one of the four main island of Japan) and landed in the middle of Aki Matsuri, an autumn festival. The celebrations were all across the city. Various groups of young men carry a mobile shrine (a sacred item in Shintoism) and under guidance of drums, two shrines are colliding against one another. After the collision a dance of the lion was performed as was explained to us at the time, but the meaning behind it all remains a mystery. All in all, it was a spectacular event and we stuck around on multiple occasions to watch the performance.

If you’re celebrating autumn, it’s a challenge to the gods! The same afternoon the sky above got thick with clouds and at night it started to rain and the wind picked up. That night it got a lot more cold for the first time, so we slept in our sleeping bags instead of on them and the next day it started to rain and it was some degrees colder. Still not under 20 degrees but still a new low while we’re on the road.
All in all the autumn freshness didn’t last. From Wednesday on we have temperatures over 30 degrees C, but the nights stay cold.

Another typhoon is coming. Japan was supposed to be typhoon free in October (as South Korea was in September), but typhoons have their own agenda. That’s what you get when you personalize them with names.
Hagibis, as it is called, is already called the super typhoon of the year with category 5 as the models suggest in their forecast.
At first it would seem it came right at us, but every day it seems to bend more to the east and leave most of Japan alone.
We do expect heavy rain and wind from the storm as a side effect. We’ll keep tabs on its development.

We’re currently cycling over the large island Shikoku and originally we planner to keep cycling along the coast, but our plans changed drastically. Through Facebook - yes you read that right - we got some attractive alternatives right through the island. It’s supposed to be tough because of the high mountains, but worth it.
We decided to follow this advice, mostly we’re short on time to following the whole coast. And if Hagibis should want to give us a tickle, we’d rather be a bit more inland. 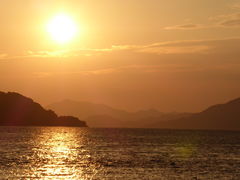 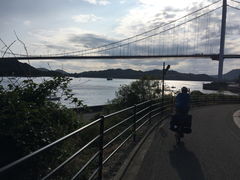 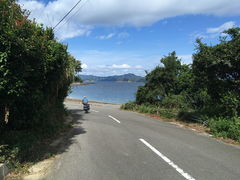 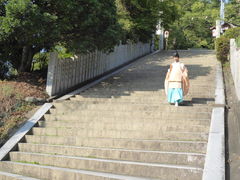 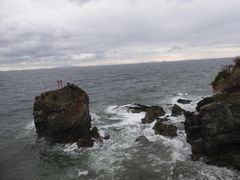 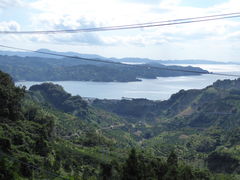 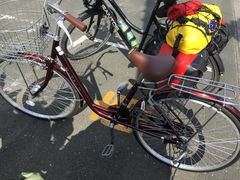 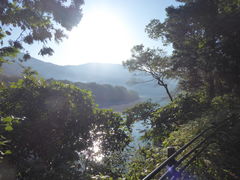 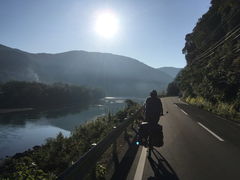 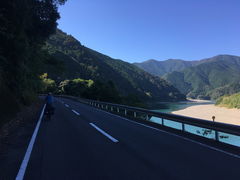 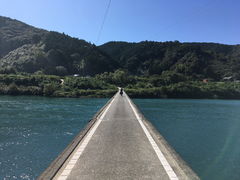 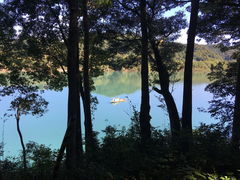 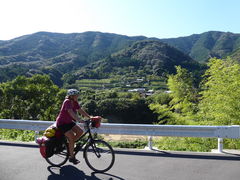 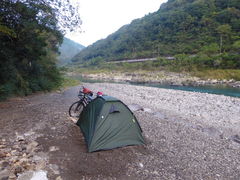 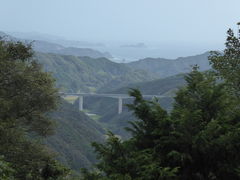 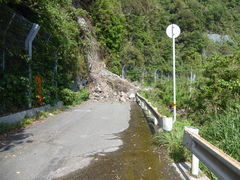