Oh, how we feel spoiled! For the first time we asked a travel agency to make bookings for our trip. The name: Asian Way of Life.
AWOL is an Dutch travel agency that organizes individual cycling holidays outside Europe (mostly Asia). They take care of the flight, the hotel at arrival and departure, Transfer from the airport to the hotel and have a cycling route planned for the country in question.
We had them planning both our flights to Seoul and from Osaka, but the eight weeks in the middle - meaning the route and the accommodations for the night - we take care of on our own. In South Korea we make partly use of their route, but in the reverse direction. And we don’t use their suggested étapes per day and accommodations. We like to see how far we can get and decide where and when we stop on each day and prefer camping (in the wild). In Japan we won’t make much use of any offerings of AWOL. We even depart from an airport that isn’t anywhere in their offerings. Yet they were kind enough to find any available options at no additional cost(!) to book a night in a Hotel and the flight home.
We only heard good things about this organization and we better off the when we had to do it ourselves.
With their help, our flight to Seoul went smooth!

Sunday we arrived much to early on Schiphol, but setting up bicycles for a flight takes an hour with our minimal experience, so with ‘better safe than sorry’, we arrived six hours early.
For readers that never had the pleasure of taking a bicycle along on an airplane: the bicycle needs to go in a special box, the peddles removed and the handlebar has to be turned sideways, in our case taped to the side of the frame and the air let out of the tires.
Here you can see who does what and the end result: 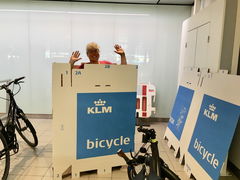 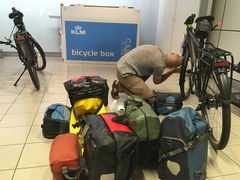 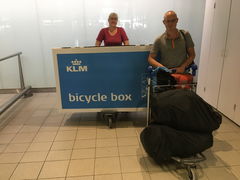 A ten hour flight is nothing to write about, but the exciting moment when you and everything else arrives, is. It always is a surprise wether or not everything arrives en is in one peace. All goes well most of the time, but we have heard stories about bicycles not arriving or when they do, are broken. Thankfully I don’t have to write a drama here, because everything arrives and in one peace. Remy had written up that we had some items to declare: figs and nuts. Because I was scared they would take away our delicious nuts I decided to eat them while I still can enjoy them. In the meantime Remy is waiting for the bicycles to arrive. Even here we divided the workload. 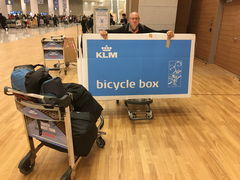 Eventually the leftover figs and nuts were not taken away, but that’s because they were hard at work to check our bicycles and since they wouldn’t fit in their X-ray scanner the boxes had to be opened.
In the hall where we arrived, an agent of AWOL was waiting for us, and with a tiny truck we drove to the hotel. 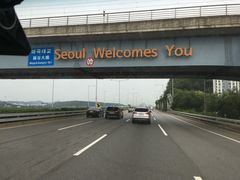 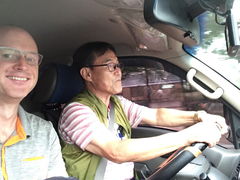 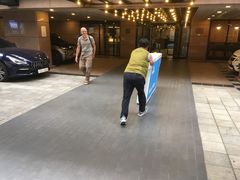 Today we’ve cycled through Seoul and viewed some highlights. See the photos for an impression off the green and bicycle friendly Seoul.
Tomorrow we’ll start for real and follow our cycle route. A small downer: there is rain expected in the coming days. But if it’s the same rain that was expected today, it might be not so bad after all. Today it was couldy with some sun, but dry, even though rain was expected.
We’ll see! 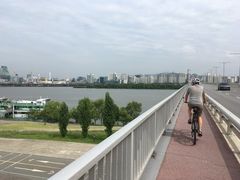 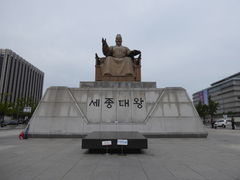 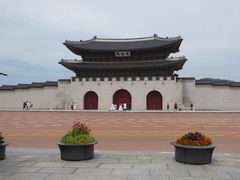 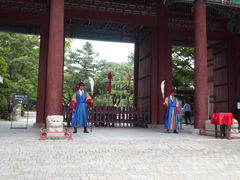 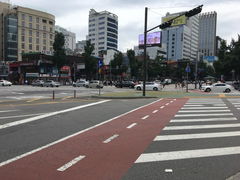 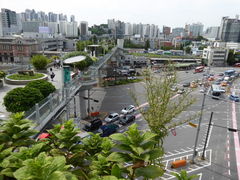 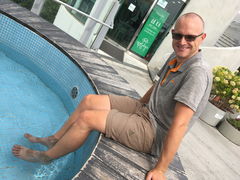 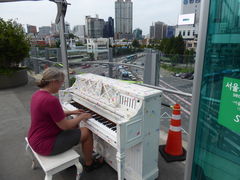 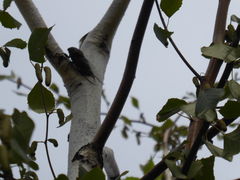