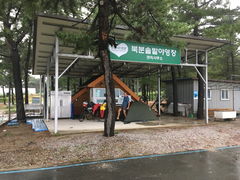 ''Remy look, here’s a perfect spot to pitch our tent!”
“Uhm Gea, I think you lost any sense of reality...”
“Just as we’ll, otherwise we find nothing!”
It’s almost dark, it’s raining and we’re looking in vain for a place to pitch our tent. You won’t believe how many perfect spots I see in situations like that to go camping in the wild!
This one looks ideal to me: dry, out of sight and right next to the beach with the sound of the waves breaking as background music.
Remy isn’t convinced, but agreed to pitch our tent anyway.
We’re almost settled when a car drives up and stop right next to our tent. Gulp.

''Well, that’s it. We can pack our things and go”, Remy says soberly.
“Let’s wait and see”. I can’t think of the prospect us packing everything up and continue cycling in the dark and in the rain. Through the mosquito net we see the two men taking in the situation, light a cigarette and move into the office.
Relieved I tell Remy we’re lucky and they’ll probably leave us alone. I spoke too soon.
One of the men comes out of the office and signals that we have to go. “No way!” I mumble and Remy steps out. The man once more signals that we have to go and Remy plainly says we need to go.
Ho there, wait a minute. No way. I’m out of the tent and I look pleading to the man. “Please”, I beg with my hands, “one night” as I make a sleep gesture, followed with a sing for one with my finger. “Please”, I beg once more. The men look at each other, speak a bit and nodded friendly with a gesture to hurry back in the tent.
That’s one thing they don’t have to tell me twice. I’m back in the tent before they might change their minds... 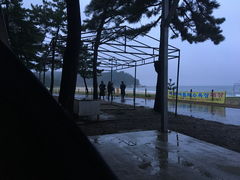 Once inside, Remy gives me a kiss “you crazy woman”, he says and we we dive back in to our sleeping bags.
After half hour the men leave and then we can finally sleep with peace of mind.
Around six in the morning I hear voices en as I look outside I had a sudden fright. Outside three meters away I se three soldiers. They wear long green overcoats and carrying guns on their backs. They give no notice about our presence, still it makes me feel a bit threatened. Like other things that feel threatening.
Maybe threatening isn’t the right word, but I do feel very uncomfortable.

That sense was the strongest as we visited to the demilitarized zone (DMZ) on Monday.
We took a taxi and both we and the taxi driver had to fill in a form, so they can check everyone that comes in, goes back out.
We drove into the DMZ to an observation tower. From that point you could see North Korea in the distance (see photo). We realized where we stood: Officially the two countries are still at war with each other, but since 1953 there is a arms truce in effect. On the other side the DMZ is has become a tourist attraction. That is something that doesn’t sit right with me, yet were participating in it as well. It is fascinating, remarkable, uneasy and threatening at the same time.
On one of the pictures below, you see Remy is oblivious to the fact he’s being filmed by the Korean Television crew. They in turn are oblivious to the fact I’m taking a picture of them filming Remy...
Next was a Korean War experience exposition where we get to see the horror of the Korean War. I soon had my fill and wanted to move on.
The hard part of exhibitions like these about wars or natural disasters, is that it sis hard for me to look at it, but we have to learn from our history, so “we wont forget”. That’s why it’s good to have them.
As the war is still going on, I wonder is it will ever end and if they might reunite. 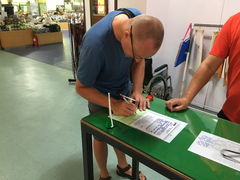 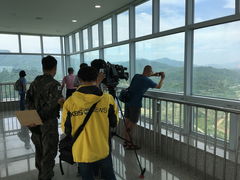 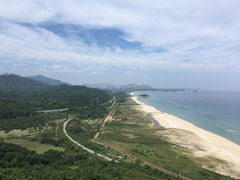 As we continue to cycle to the south, we se numerous silent witnesses to the war along the coast in the form of high fences adorned with bar wire and many (sometimes manned) guard towers bunkers, camera’s and soldiers on patrol. Cycling along the east coast of South Korea is very interesting to say the least, but also full of other varying aspects like the wonderful nature (rock formations and pine forests), Culture (temples and pavilions) and we cycle through lively fishermen’s towns and harbors. It is striking that the fish being sold is either alive or dried. Sometimes we have stretches that are completely flat, but we also had enough to climb over steep hills. And all marked as cycling route and mostly over cycling lanes and bicycle paths.

And then you see the bizarre situation that all wild camping spots are occupied: Korea is on vacation because of a national holiday to celebrate the harvest. And what do the Koreans do? Camping! Places along the coast are full of camper vans and tents. Every place use occupied, except for a shower room that is out of order; and that’s where we can stand perfectly. That’s what we call Creative Camping!
We also see a lot of recreational cyclists. Apparently the Koreans are good-weather-cyclists. Yes, its finally sunny and dry since Friday.
So far our update, we’ll be cycling on. Into the country, into the mountains! 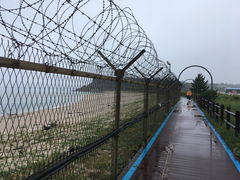 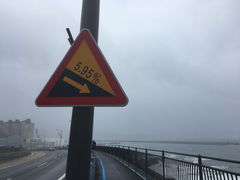 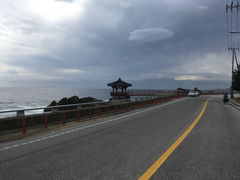 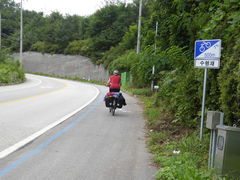 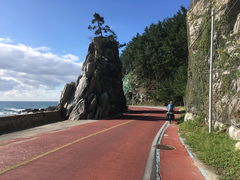 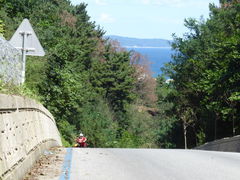 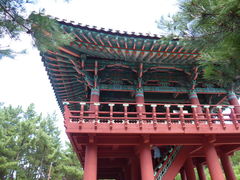 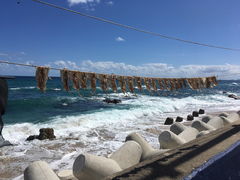 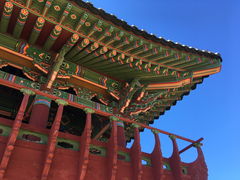